Neuropolis was a demonstration game made in 2010 to highlight specific functions of the brain, and to help explain the concept of neuroplasticity. Neuroplasticity is the ability of the brain to change and adapt over time. This demo was made as a prototype for researchers at McGill University, who were interested in diving into educational games. The game itself was luckily saved by the Internet Archive and is playable here. A further iPad application existed, but I do not have screenshots of it. Attempts will be made to get the demo running again at some point. Web application written in ActionScript 3.0 and Adobe Flash, Objective-C for the iPad application. 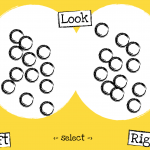